How to take screenshots on a Samsung Galaxy Tab P1010

In previous entries about the Samsung Galaxy Tab, I’ve included screenshots from the device.  Getting these screenshots has always been a little tricky.  Until Ice Cream Sandwich, there wasn’t a standard way on Android to achieve this.

I had been preparing a post about a piece of development software called Android Screen Capture but then the download link seemed to disappear and there were other issues regarding its use. I think you have to install the Android SDK for example. I’ll just say that while I like ASC it can be a little tricky to set up.  You can also display your device fullscreen which is very handy for presentations and demonstrations. 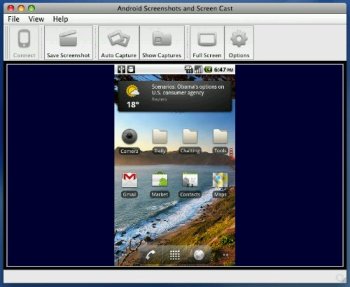 Screengrab all the things! 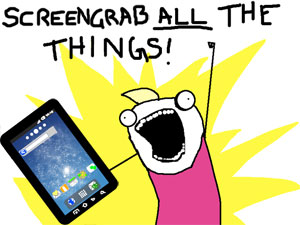 Yes, even I use memes

It turns out there is a simple method to take a screen shot just using the Galaxy Tabs themselves.

The picture taken is saved into a ScreenCapture folder accessible using the gallery. 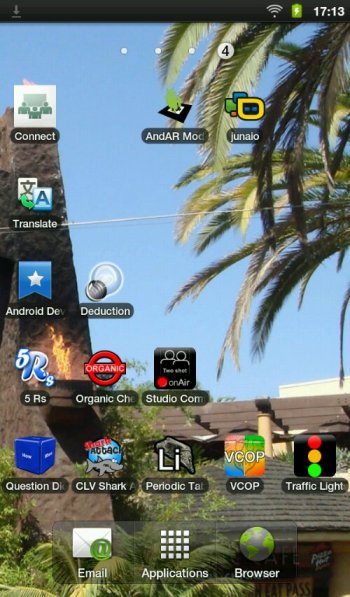 The emptiest of my home screens. It's filling up fast though

Sorry folks, I’ve not posted in a quite a time.   It’s been hectic, plus I’ve been experiementing with a lot of resources that haven’t fully proven themselves.

I have spent some time recently looking into 3D and 3D resources.   Before I go any further though I need to clarify something.  3D is a gimmick.   It causes too many eye-fatigue problems for too many people to be used for anything other than “wow factor” events and theme parks.  Estimates for people who have problems with 3D video range from 12% to 30% of the population!  That’s people who get headaches, people who can’t see 3D and people who can’t see specific types of 3D.

Personally, I can only see what I call gross 3D, that is the real in-your-face stuff, the stuff that shoots our of the screen.  My eye condition means all the subtle stuff involving depth behind the screen totally passes me by.  So you see, along with 30% of your class, I have a vested interested in making sure 3D is used right.

Over the next view posts I’m going to break down 3D into it’s different elements (I could have used “dimensions” I suppose) and the first one is that calling it 3D leads to confusion.  How?  Because computers which create environments in which objects exists are already making things in 3D.  Jurassic Park, Toy Story along with every movie since used computers to create a 3D world, but they showed it only in 2D.

What you put glasses on, you’re actually looking at Stereoscopic 3D or s3D.   That’s where two different views appear on the same screen and the glasses ensure you only see one view per eye.

Next up, I’ll explain the differences between and benefits of Passive Linear, Passive Circular, Active Shutter, Dolby Digital and Imax s3D display systems.

In my last post on this topic I talked about digital cameras and how green works best.  But then, what green should you use.

The technology has improved greatly from a couple of years ago and exact colour doesn’t matter as much as it once did.   You can certainly avoid the specialist paints for chromakey which sell at nearly £60 a litre! 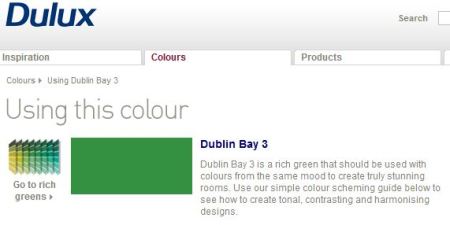 I went to the local B&Q and looked through colour charts until I found that closest I could to Primary Green.   Dulux’s Dublin Bay 3 is a really strong, quite dark green which when lit by a couple of cold ceiling lights produces a very good result.

The most important thing with painting a room is making sure the surface is evenly painted so that the wall is the same colour all over.  That’s the important bit, uniformity.

Oh and do make sure you buy the Matte finish, not the Satin or Gloss, the whole point of painting the wall one colour is defeated if the camera sees a great white splodge of reflected light.

How to build a TV studio | Tagged: screen, tv, video |

The hardest part about designing a TV studio was finding the right mix of technology to ease-of-use.   Before I ordered anything, I spent a lot of time visiting other schools and looking at their solutions.   The problem I frequently saw was that a school would go to a professional company who would provide the exact right kit any small, professional TV studio would need.

The trouble with this is that schools don’t need the same kit as a professional TV studio.  We don’t need £4500 cameras, or high-end editing systems.  We don’t need High Defintion video.  Not when we’re going to compress it to 640 pixels wide in order to share it on a VLE or stream it into every classroom.

Professional studio companies will happily supply this level of equipment because it gives the students access to the same kit they would use if they get jobs in the media.  That’s the excuse…sorry reason.  But this stuff is sooooo complex you have to train the students how to use it, and let’s face it, it’s also really, really expensive.

The Newtek Tricaster is a fabulous video switcher and can produce incredibly clever greenscreens, but it’s cheapest educational price is nearly £8,000!   That’s £1,000 more than the entire studio I fitted!

Fortunately, during my research…umm…”quest”*…I visited Sunderland’s City Learning Centre and was introduced to the Edirol LVS-400 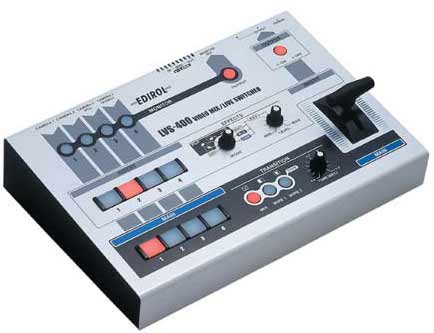 This Video Switcher is a hardware “box” that allows you to change between 4 different video inputs and greenscreen/bluescreen one video source (such as your camera) over the top of another (such as a computer running powerpoint) .  And it does it for the amazingly cheap price of £786.  Yeah, I know it doesn’t sound that cheap but it is one tenth the cost of the Tricaster!

The real benefit of the Edirol though is training time is two minutes – 60 seconds of which involve telling the children not to idly flick the lever up and down.  I’ve given up on trying to stop the teaching staff.

Rather than spending your time training students in equipment you yourself will barely know how to use, the Edirol provides an easy greenscreen solution allowing you to spend your time encouraging the shy kids, getting others to spend more time on the presentations and generally just enjoying the experience.

This is probably the most expensive “thing” I’m going to talk about, but what a difference it makes to my working life. 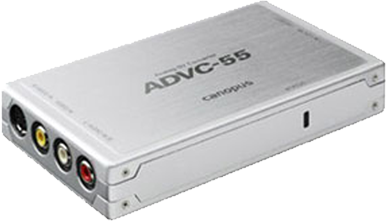 The ADVC-55 takes in analogue video from almost any source, VHS, Sky+, camcorder and outputs as firewire.  This allows you to take any old video and record it onto a computer.

The signal is clean, so you won’t have codec issues or anything like that getting in the way.  It’s a great way to keep using those old VHS-ed schools programmes and an even better way to grab all those new documentaries.

THe ADVC-55 comes in at around £120, (warned you it was pricey) but for convenience and ease of use, I can’t reccomend it enough.

Some software isn’t glamorous or particularly mind-blowing; some just make your life that little bit easier.  Windows Snipping tool is this type of software and what it does, it does really, really well.

Preinstalled on Windows 7 and free to download for Windows Vista, the snipping tool allows you to very quickly grab a still image from your screen.   Excellent for highlighting eror messages for IT Support, for pasting images into PowerPoint or even WordPress blogs :),

The images can be sent directly to email, or saved, or annotated.